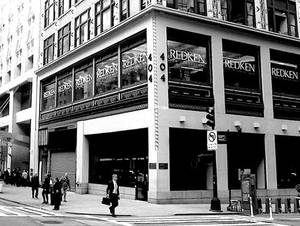 Who are the Redken Brand Ambassadors?

Whether they are backstage at Fashion Week, behind the chair with Hollywoods most notable names, educating on the mainstage, or inspiring others on social media, Redken Brand Ambassadors are at the top of their game leading the industry with expert know-how and insider tricks of the trade.

A native of Philadelphia, PA, Adrienne is the owner of Adrienne Dara Hair Salon, an educator and a business coach.  She is passionate about teaching stylists, with two online education platforms; The Lightening Library and The Lightening Library Lab, created to help commission stylists, suite owners, booth renters and salon owners with both the business and creative side of the industry. Additionally she teaches in-person classes around the country through her ADH Education division. Adrienne's mission is to help stylists learn to run their business with clarity and to gain confidence behind the chair.

Educator, Texture Expert and colorist, Jamal Edmonds has consistently created a buzz in the hair industry for more than two decades. The 2022 North American Hairstyling Awards (NAHA) winner and 2018 ABS Global Image award-winning stylist is the owner and creative director of the flagship Mizani salon, Lamaj in the City, located in Washington, D.C.

Rodney has been featured in top national and regional consumer publications and television programs and travels the country giving lectures on the fusion of fashion and beauty through hair and styling for runway shows.

The go-to colorist for Hollywood's leading ladies, Cunningham is the definition of creativity partnered with hard work and authenticity.

Originally from Cuba, Leysa Carrillo is a vibrant hair colorist and texture expert based in Las Vegas, Nevada with over 12  years of experience. She is a nationally recognized industry leader for her hair color transformations on textured hair and continues to pave the way with her artistic flair and creative techniques.

A native of Jacksonville, Florida,  Philip Foresto didn’t grow up aspiring to work in the hair industry. In fact, he remembers his mother cutting his hair from the kitchen of their home. In 2009, he left his hometown for New Orleans, LA, where he would meet his now father-in-law, a hairstylist of over thirty years. He allowed Foresto to work in his salon sweeping floors and answering phones, and after this introduction to the world of professional hair, Foresto was hooked. From there, Foresto says he made it his life’s mission to become the best hairstylist he could be. Follow Philip on Instagram for hair inspiration and Foresto’s work as a Redken Ambassador.

Professional hair colorist Rachel Redd has over a decade of experience in the beauty industry and is based in Atlanta, GA. Growing up in Marietta, GA, Rachel’s love for the visual arts inspired her to embark on a career as a professional hair colorist. Rachel opened Rachel Redd Color Studio Salon in 2015 and sees clients who travel from near and far, for her signature techniques and healthy, flawless hair color creations.

Los Angeles based hair colorist Matt Rez specializes in all techniques of coloring including his trademark Midlight process. His passion for painting and the art of natural looking hair color led him to cosmetology school in Portland, Oregon. After moving to Los Angeles, Matt attended the Vidal Sassoon Academy for advanced hair color techniques. As an adherent of continuing color education, Matt stays abreast of the latest color trends, products and professional insider innovations. His celebrity clients include Adele, Angelina Jolie, Hailey Bieber, Kaia Gerber, Chiara Ferragni, Eiza González and Lili Reinhart. Matt's work has been featured in Vogue, Allure, Vanity Fair, ELLE, Glamour, Marie Claire and InStyle. As an influential voice in the world of celebrity hair coloring, he has made appearances on The Real and ABC News, and has been featured in numerous press pieces. Currently, Matt sees clients at his salon in Los Angeles.

MORE FROM THE BLOG