BRASSY HAIR: WHY IT HAPPENS AND HOW TO PREVENT IT 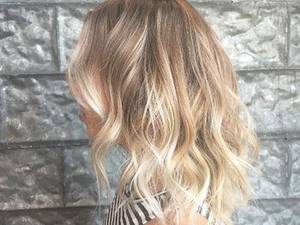 Weeks after coloring your hair, you start to notice something strange: the shade you left the salon with is no more, and now your hair has taken on an undesired yellow, orange or red tone. What gives? Brassy hair, that’s what. Not only does brassiness effect blondes, but brunettes can also experience unwanted orange and red tones. While these unwanted pigments can be incredibly frustrating, we're here to help. Read on to learn what causes brassiness, how to prevent it, and how to get rid of brassy hair.

WHAT IS BRASSY HAIR?

To lift dark hair, bleaching with a mix of ammonia and peroxide is usually a necessary part of the equation. When hair is bleached, melanin, a dark brown to black pigment, gets diluted in a process known as oxidation.

After bleaching, the next step is usually to apply your haircolor, which deposits artificial pigment onto your locks while removing some of your natural color.

When brassiness occurs, that also means that among the red, yellow and blue color molecules your hair dye contains, the blue ones have made a faster departure, leaving—you guessed it—just the warm tones. Since the blue color molecules are smaller, they’re broken down easily and fade quicker with every wash. Unfair!

Fortunately, you have several options when it comes dealing with brassy hair, in terms of both fixing brassiness once it appears and preventing it from happening at all.

HOW TO GET RID OF BRASSY HAIR

Unwanted brassy tones can appear in any hair color, affecting those with both color-treated and natural hair. To fix brassy hair, you need to understand what it is your hair needs. The simplest way is to picture the color wheel. Whatever tone you want to cancel out, you'll need the pigment located directly opposite on the color. Using the unwanted tones complimentary color will help neutralize and tone your hair. Once you've identified your unwanted tones, read on to learn how to fix brassy hair at hair and when you need the help of your stylist. 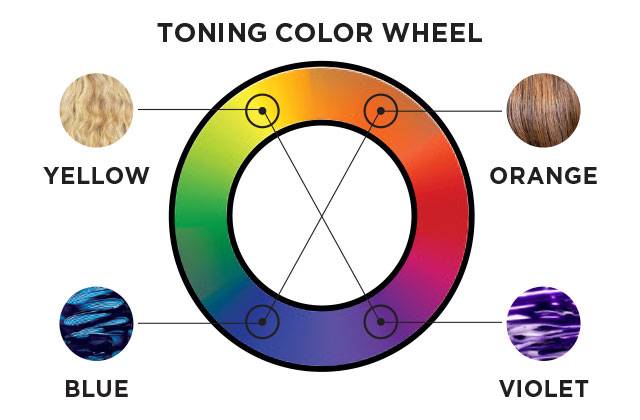 1. ADD A PURPLE OR BLUE TONING SHAMPOO TO YOUR REGIMEN

Need an at-home brassy hair fix? This is where toning shampoos come in. Formulated with purple, blue and other pigmented formulas, these shampoos help cancel out brassy tones that appear in between your coloring appointments. Think of this as your at-home toning solution.

Based on the color wheel above, you can see most blondes struggling with unwanted yellow tones will need a purple shampoo like Redken's Color Extend Blondage, while brunettes with orange and red tones will need a blue-tinted shampoo such as Redken's Color Extend Brownlights. Our color-depositing shampoos will remove unwanted brassiness while cleansing and strengthening hair. This toning shampoo should be used 1-2 times per week in between salon appointments.

2. USE SHAMPOO FOR COLOR-TREATED HAIR THE REST OF THE TIME

Since overusing a color-depositing hair product may end up turning your hair blue or purple, only use it once or twice a week. The rest of the time, be sure to use color-protecting hair products like Redken Color Extend Magnetics Shampoo & Conditioner. The Color Extend Magnetics line for color-treated hair is gentler than regular shampoo and is sulfate-free, an ingredient known to fade haircolor.

To maintain strong, bright blonde hair, you'll need a complete haircare regimen to strengthen and help neutralize the brassy tones that can start to appear in between salon appointments. In addition to purple shampoo and conditioner for daily care, integrating an ultra-pigmented purple hair mask like Redken's Color Extend Blondage Express Anti-Brass hair mask can help transform your blonde from brassy to cool and bright in just 5 minutes.

For even more options, check out our range of color-depositing masks to achieve icy, rose, and honey tones at home. These masks are a great way to enhance or refresh your hair color in only 5 minutes.

SEE THE ANTI-BRASS MASK IN ACTION

4. HEAD TO THE SALON FOR A PROESSIONAL TONING SERVICE

If you've had your hair lightened or colored, chances are you've had a toning service. Toner is a gentler form of haircolor that gradually fades over time, allowing you to experiment with new colors without commitment. Also known as a demi-permanent color, hair gloss, or glaze, toners are also used by colorists to correct and cancel out unwanted yellow, orange and red tones in hair.

If you've noticed your haircolor fading between appointments or can't seem to kick brass to the curb, it's probably time to head back to the salon. Getting a professional gloss service between color treatments will make your color last and look fresh longer.

Redken’s Shades EQ Gloss Service, which is often used as a toner for brassy hair, will correct or enhance your hair color with results lasting up to 6 weeks. On top color correcting, a Shades EQ Gloss boosts shine, conditions hair, and balances hair pH for healthier looking and feeling strands. Plus, this toning service takes as little as 20 minutes—a perfect quick fix for brassy hair!

FIND A REDKEN SALON NEAR YOU FOR A SHADES EQ GLOSS

HOW TO PREVENT BRASSY HAIR

The key to living brass-free is avoiding it altogether. While maintaining salon-fresh color is made harder by environmental factors and pollutants, there are plenty of things you can do to take care of your new color. To prevent brassy hair and extend your haircolor, follow these tips.

1. CHOOSE THE RIGHT HAIRCOLOR FOR YOU

Select a cool haircolor, like one with the word “ash” in the name, since it’s less likely to turn brassy than one that’s warm. If you gravitate toward warmer shades, don’t worry; there are plenty of lighter haircolors, such as greige blonde, that provide a nice balance of warm and cool tones.

Need a place to start? Redken’s new Color Fusion Cool Fashion Collection contains 14 haircolors, including shades of blonde that are meant to provide cooler results and will counteract brassiness. Using C-Lock technology, the collection has larger dye molecules so cool tones stays in place for up to 8 weeks, and the haircolors all have a black-to-gray background so that warm tones are less noticeable.

Looking for some cool-toned haircolor inspiration? Browse through @Redken on Instagram for a reference photo to share with your stylist.

2. PROTECT YOUR HAIR FROM THE SUN & POOL

We know, we know: how can you say no to the pool and soaking up some rays? But if you want your haircolor to stay put, it’s best to stay away. The chlorine commonly found in swimming pools can strip your hair dry, leaving your locks dull and damage-prone. And when hair becomes damaged, your haircolor will have a harder time staying in place, meaning more opportunities for brassy haircolor to show up.

Sun exposure can also do a number on your haircolor by making it fade faster and making brassiness more visible. So the next time you go outside, make sure you cover up or use a hair sunscreen.

3. INVEST IN A SHOWER FILTER

Washing your hair with water that leaves a large amount of mineral deposits, including chlorine and iron, is bad news for colored hair since the buildup is drying and the chemicals could end up fading your haircolor, leading to another opportunity for brassy hair to reveal itself. A shower filter can help cut down on the mineral deposits, so your haircolor stays around for longer.

MORE FROM THE BLOG